Just got back late last night from Philly with mixed results. I started off strong before I left with a run up the hills of Hopkinton. The challenge then began by a combination of lack of preparation and going outside my typical travel routine. 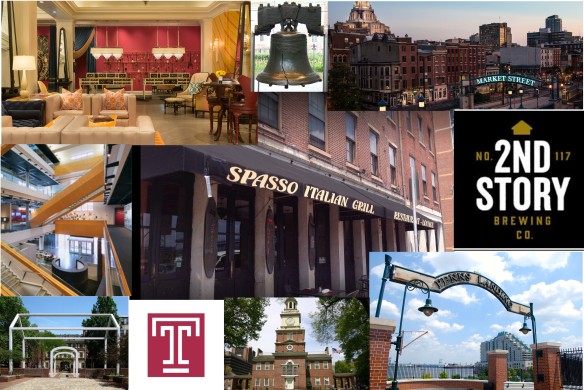 My daughter had college orientation so I traveled down with her with the intent on working in my hotel room for two days. Seemed simple enough. But, I decided to stay at the Hotel Monaco in Old City so I could get out later in the day and check out a few sites or do a running tour in the mornings. That was the downfall.

I learned this week how breakfast has become such a key success factor in my healthy living journey. The Marriott, Sheraton, Hilton, and Intercontinental hotels all have great buffets. I’m guaranteed a fast breakfast with lots of healthy options. Not so with Kimpton. You have to order up  to your room or at the restaurant. Where I am used to getting food in me within fifteen minutes and then running off to my day, the sit down experience meant that I either ordered up food that I wasn’t quite sure was fitting into my diet or I skipped breakfast altogether because I didn’t have time. Having ate my Skinny Girl bar I always have handy, the day I missed breakfast meant I didn’t eat until after 1:00p.

That starts the downward spiral of food obsession and hunger. The fact that I was still running these two days also meant that my hunger was stronger and my mind weaker. Day one I did a loop through the Old City and then headed to Penn’s Landing to run up and down the bridge stairs and outdoor theater stairs. Then headed to the hotel gym for upper body weights. Great workout, hunger inducing. The next day I stuck indoors to the treadmill as it was already 80 and humid in the morning. Then rushed back to my room to shower and hop on a call. Thus, when lunch and dinner rolled around, I was more focused on getting rid of my hangries and not thinking as much about good choices.

I had a bag of chips from the mini bar. I had a hot dog. I ate a turkey sandwich on a massive whole grain roll (only half, but still!). I had hash browns and a full chicken sausage along with a scrambled egg. I had two hunks of fresh mozzarella cheese (200 calories worth). I even stole some French fries from my daughter’s dinner on the way back to Boston. One of these choices in a week is one thing. To slide at almost every meal over two days was horrible. Yes, I had a crazy good roasted vegetable salad at a brewery. Yes, I grabbed a yogurt and red grapefruit at Temple U while waiting for my daughter at pick-up. Yes, I kept to my workout schedule. But, the scale told me all I needed to hear. Up a pound.

I know I’m paying for it in more ways than the scale. I had my go-to favorite this morning, an egg sandwich (Thomas Light Whole Grained English Muffin, Canadian bacon, fried egg, ultra thin swiss, and spinach). 250 calories of goodness. Instead, my stomach is in knots. I have not had enough plants in my diet and the heavy sandwich that normally satiates me as I go mostly vegan or vegetarian the rest of the day, feels like a rock. I’m also exhausted which is probably from poor eating too.

What I will say is that my goal of doing a running tour was definitely worth it. I didn’t make it to the Rocky stairs this time, but it’s on my list for August when I send my little girl off to college. Instead, running through the historical parks, ducking into the alley where the Ben Franklin Museum was, and catching glimpses of the Liberty Bell, Independence Hall, and a mock up of the original White House, along with a fun challenge at the river amphitheater, was well worth it.

Maybe not all was lost.